Posted by Manda Maree on February 15, 2016 in Review, Tried and Tested | Leave a comment

I was a very lucky girl on Sunday, when my partner decided to make me these very cute pancakes using a gluten-free pancake mix I had picked up to try earlier in the week.

I had tried a ‘from scratch’ gluten-free pancake recipe previously and found it not really up to the task of satisfying my pancake cravings, plus this one (Woolworths’ Free From Gluten Buttermilk Pancake Mix) was in the ‘shaker’ variation so had a whole heap of added convenience included – just add water and shake!

All in all, the process and the end result were pretty much the same as the ‘regular’ pancake shaker mixes. The texture was quite close (fluffy) and they were very tasty. I have quite a sweet tooth, but unlike the previous experience where I had to drown them in sweetener, just a little bit of maple syrup atop these bad boys was more than enough.

I did try eating one of them later after being in the fridge, and that wasn’t quite the success I have had in the past with the usual mixes as it was a bit ‘dry’. But with some syrup it was quite fine, and I imagine that if you weren’t lazy like me and got up and put it in the microwave for a bit, it would be revitalised (I will try that next time I promise).

As far as the ingredients, there is a note on the bottle that it contains milk and egg, but I couldn’t see anything in the ingredients to suggest high-FODMAP ingredients and all you add is water. It is also listed in Dr Sue Shepherd’s Low-FODMAP Diet Shopping Guide as a safe buy. I had absolutely no reactions at all (normally I blow up like a balloon after pancakes), so I am marking these as a success.

The bf gets a mark of success also – I mean c’mon, how cute is that. No wonder I got kicked out of the kitchen when I came to see what he was up to heehee. 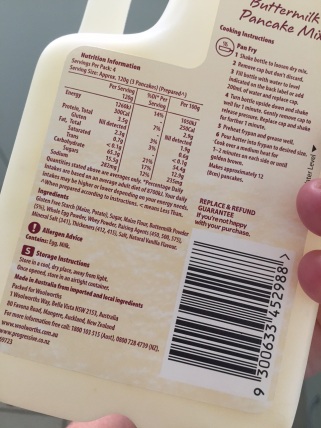